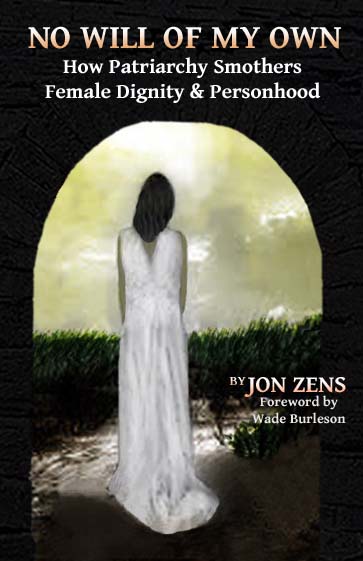 No Will of My Own: How Patriarchy Smothers Female Dignity & Personhood

In 1912 Jesse Penn-Lewis noted from Genesis 3 that it was the serpent, not the woman, who was cursed: "The serpent is cursed, but, in effect, the beguiled victim [Eve] is blest, for through her will come the ‘Seed’ which will triumph over the devil and his seed; and through her will arise a new race through the promised Seed (Gen.3:15) . . . . Henceforth it is also war by Satan upon the womanhood of the world, in malignant revenge for the verdict of the garden" (War On the Saints). Church history reveals that Roman Catholicism and Protestantism taught and practiced forms of patriarchy that essentially sided with the evil one's disdain for females. Women were not allowed to function or speak in the church, were viewed as existing to serve males, and were seen as conduits of sin and error. John Calvin, for example, rashly affirmed "Therefore all women are born to submit to the pre-eminence of the male sex . . . . Let the woman be content in her position of subjection, and not feel indignant because she has to play second fiddle to the superior sex." In No Will of My Own, author Jon Zens compares the patriarchy taught to families by the Roman Catholic and Dutch Reformed churches in Holland with an aggressive patriarchal wing of the home-schooling movement in America. He shows that the earmarks of patriarchy doctrine result in varying levels of abuse of young girls and wives. This book serves as a vital warning concerning the misuse of Scripture and church tradition to smother female worth and dignity. In almost every religion around the world, the hearts, souls, and bodies of women are sacrificed on the altar of fundamentalism. In No Will of My Own, Jon Zens takes a sobering look at abuse within patriarchal Christianity. An important book. -- Hillary McFarland, author of Quivering Daughters: Hope and Healing for the Daughters of Patriarchy

Title: No Will of My Own: How Patriarchy Smothers Female Dignity & Personhood

No Will of My Own: How Patriarchy Smothers Female Dignity & Personhood